What to Expect from Tomorrow’s Blockchain Healthcare Economy

If the key buzzword of yesteryear was “disruption,” today’s is definitely blockchain Healthcare.

Around the world, tech-savvy entrepreneurs are investing in this technology, banking on its ability to completely change the way people interact with one another and the institutions they rely on.

By far the most famous blockchain technology on the market at the moment is bitcoin. Its surging price and unprecedented volatility have turned early investors into millionaires, and nobody knows how far it will go.

Few industries are as ripe for disruption as the healthcare industry, and visionary developers are already devising ways to revolutionize our currently labyrinthine healthcare system using this new technology.

But at the moment, blockchain is still in its infancy.

The revolution has not yet begun, which means technology companies still have time to position themselves for the oncoming change.

What Does Blockchain Technology Do for Healthcare?

At its core, the concept of blockchain technology is simple.

The problem it addresses is as old as money itself – trust.

For most of human history, governments and their institutions were responsible for implementing systems of managing trust between partners in transactions.

Anyone who has ever signed a contract understands the underlying issue of trust. You expect a contractual transaction to occur according to a certain set of rules overseen by a mutually trusted institution.

If you use United States Dollars to pay for a good or service, both you and your partner implicitly trust the Federal Reserve to represent the value of the transaction in good faith.

With blockchain-based cryptocurrency, you no longer need a third-party institution to keep the score of the value of your transaction. That value is defined securely in the transaction itself as a digital asset that is then encrypted and broadcasted to every other party on the network – if the network agrees, then the transaction is valid.

This is the basic foundation of bitcoin, which replaces dollars as a medium of exchange and a store of value without requiring any degree of institutional verification. The system addresses its users’ needs all by itself.

To counterfeit a bitcoin transaction, for example, someone would have to hack hundreds of separately encrypted blockchain ledgers and change their contents with perfect accuracy.

In a few industries is the issue of trust as important as it is in healthcare.

Blockchain-enabled smart contracts can streamline this process, minimize fraud, and cut out middlemen throughout every step of the core healthcare business process. 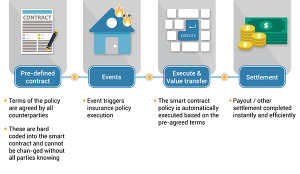 Specific Examples of How a Blockchain Healthcare Economy May Work

Blockchain technology can resolve a major ethical problem with clinical trials that get cut short. Often, when doctors cut a trial short, they no longer report data to any of the patients involved.

For someone with an unknown, experimental device in their body, this is an understandably extreme concern.

A blockchain-based platform that automatically collects and aggregates clinical trial data would allow these patients to monitor claims and health issues related to the trial even if doctors aren’t actively working on it anymore. Furthermore, it would give each patient a compelling claim to any positive outcome that results.

Blockchain-embedded medical data may finally put patients’ health data in their own hands, empowering each one to deal directly with the provider they trust.

Do you have a valuable idea for the blockchain healthcare economy of tomorrow? Our developers are blockchain experts who can make your dream a reality – contact us now to learn more. 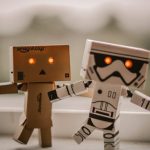 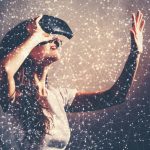 How Virtual and Augmented Reality is Going to Disrupt the Banking and Finance Industry
We use cookies to ensure that we give you the best experience on our website. If you continue without changing your settings, we'll assume that you are happy to receive all cookies on our website. However, if you would like to, you can change your cookie settings at any time.OkRead more