Security and PCI Compliance in Cloud for Finance Industry

Companies can distribute data or software faster than ever before. The cloud allows for greater scalability, meaning a network can more easily be adjusted for larger or smaller amounts of users. And several security measures are well-suited to systems rooted in the cloud.

In addition, compliance in the cloud can be easier than it would be when using legacy systems.

If a cloud database does get breached, software patches can be deployed to all computers in the system in short order. Automatic updates and the greater ease and rapidity with which we can distribute them make the cloud attractive to those in the financial sector.

Multi-layered cloud security is possible within the, helping to defend against many common attack vectors such as distributed denial of service (DDoS) attacks. It also provides a way for companies to isolate portions of their network so that fewer data will be compromised in the event of a breach (although given the amount and severity of hacks we have seen in recent years, it stands to reason that not all companies practice this).

The Importance of Secure Cloud Servers

While the cloud provides greater opportunities for security, it also creates bigger problems when it does get hacked.

If an attacker compromises a cloud server, they will have accessed a very large database. By contrast, hacking into an individual network only grants an attacker access to the devices currently using that network.

The last few years have seen a series of historic hacks. One such hack involved cloud security provider Cloudflare in 2017. Due to the extent of data that might have been breached, many experts urged people to change all of their passwords. Up to five months went by before CloudFlare even knew they had been infiltrated.

This is an example of what can happen when a cloud-based system becomes compromised.

That’s why cybersecurity is so important for companies relying on cloud computing. PCI compliance is intended to ensure that those in the financial industry take all necessary actions to secure customer data. In some ways, the cloud makes such compliance easier.

Payment Card Industry Data Security Standard (PCI DSS) refers to a strict set of security standards that payment processors must adhere to. These standards specify what encryption measures must be met in order to provide reasonable assurance to customers that their data will be protected.

PCI DSS demands that the company handling financial transactions be compliant with all associated standards. If your cloud vendor gets hacked and exposes sensitive customer data, the fault lies with you and your company.

App Maisters understands these issues and complies with all 288 required PCI DSS controls. Use of our financial services will be the safest transaction you’ve ever made.

CONNECT WITH US
COPYRIGHT © 2021, APP MAISTERS ® IS A REGISTERED TRADEMARK. ALL RIGHTS RESERVED
How to Create a Better Business Strategy Using Artificial Intelligence 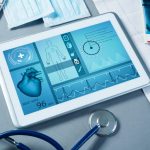 5 Ways the Digital Transformation is Revolutionizing Healthcare
We use cookies to ensure that we give you the best experience on our website. If you continue without changing your settings, we'll assume that you are happy to receive all cookies on our website. However, if you would like to, you can change your cookie settings at any time.OkRead more